Several years ago, Jon Deaner traveled to Argentina on a UJA-Federation of New York-led mission with other young professionals to learn about Jewish life and tradition. Among the most moving experiences he had was his visit to a JDC day care program called Baby Help where he met young children living in poverty.

A photographer, Jon captured his visit in beautiful pictures. But as his initial connections to the children faded with the passage of time, it was that tangible feeling of being involved and making a difference Jon sought to replicate in a brand-new initiative at JDC.

At about the same time, Doron Goldstein -- the son of JDC Board Member Yoine Goldstein and one of the founders of Entwine, JDC’s young Jewish leadership platform -- was looking to transition from Entwine but remain actively involved with JDC.

Doron grew up traveling all over the world, meeting Jewish leaders from different communities and witnessing firsthand the lifesaving work of JDC.  He understood the only way to be an instrumental player in JDC’s work was to engage head-on with program directors and content.

Together, Jon and Doron founded the first donor group under JDC Ambassadors. At a membership level of $2,500, the Impact Network model provides access to JDC Ambassadors events and engagement. Group members focus on a particular issue under JDC’s purview and then commit to raising funds for a project they believe in.

All of this comes as no surprise in 2013. Jewish philanthropy research shows new donors are excited to be involved in charitable causes. Many serve on non-profit boards, encourage friends to give and donate online; and once they are hooked, they want to go “all in.”

“They want to develop close relationships with the organizations or causes they support; they want to listen and offer their own professional or personal talents, all in order to solve problems together with those whom they support,” the research sats. Jon and Doron’s desire to “be information-driven, impact-focused, proactive, and peer-oriented” spoke to all members of the Child Intervention Impact Network.
Under Jon and Doron’s leadership, the group chose to learn about JDC’s involvement in early childhood programming and voted to support JDC’s Baby Help in Argentina. They met over Argentine wine and discussed Argentine history and politics; they learned about Baby Help from the director, Viviana Bendersky; they asked early childhood experts based in New York about the most up-to-date practices. They plan to support Baby Help concretely by purchasing vaccines and meals, raising awareness and communicating new trends in care. The bottom line: They are strategic philanthropists.

Following this idea, other groups have formed using the Impact Network model focusing in an issue of their choice. JDC is looking forward to engaging individuals more directly and giving donors the opportunity to be hands-on involved. To learn more about or join JDC Impact Networks, visit: http://www.jdc.org/impact.

This blog post features information from pages 11-16 from the report Next Gen Donors: The Future of Jewish Giving.
Posted by JDC at 10:32 AM No comments:

Making the Connection was the theme of the JDC Ambassadors Symposium, May 6-7, focusing on how we can make a genuine and meaningful connection between us as caregivers and philanthropists and the people in need around the world that we help. 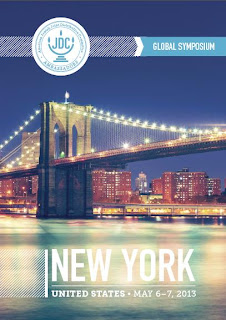 The ideal connection would look very different from the top-down approach that too often has served to increase the divide among people. It would be about achieving true empathy, about empowering the people we help so that they are the best allies in helping themselves, and about stretching how we do philanthropy and engage others.

Monday's session looked at how we care for our friends as a model for how we do good in the world.


Park Avenue Synagogue’s Rabbi Cosgrove spoke about empathy and the Hebrew concept of arevut, the responsibility we have towards one another (click here). Letty Cottin Pogrebin spoke about her personal experience fighting breast cancer and the type of care that she sought from friends and family, and articulated principles that resonated with her experience and others' with whom she spoke. Foremost among them was the importance of listening to the voices and wishes of the people we want to help and not assuming that we know best.


What might this principle look like if we put it into play in our humanitarian work as well as our personal lives?

There are few programs that better demonstrate JDC's vision of listening to and empowering the people we serve than Jay Ruderman’s groundbreaking work with disabled people in Israel -- a partnership among his family foundation, JDC and the Government of Israel that goes by the name Israel Unlimited.  A staggering 1 million people suffer from disabilities in Israel (key stats here), but the program does not focus on accessibility alone. Instead, it makes disabled people the actors in their own story -- helping them to challenge stigmatization (here's an excellent piece on an inspiring blind Arab Israeli woman) and build up their confidence and abilities to act as positive forces in their communities through volunteerism and a new emphasis on work.

In the end, it’s Agatha who makes it impossible not to hope.


I’m with a JDC Ambassadors delegation at the 70th anniversary commemoration of the Warsaw Ghetto Uprising. At midnight on April 19, in the light of two flames that rise from menorahs on either side of the famed Ghetto monument, Cantor Yaakov Lemmer sings in Yiddish about small boys who steal outside to sell cigarettes, and of a searing loss of innocence. Next to me, a member of our delegation sings quietly along—she remembers the tune from childhood.

Loss of innocence is an elegant metaphor for the brutal desperation that drove parents to allow their young boys to risk their lives to bring home crumbs. The story of the Warsaw Ghetto is unendingly heinous. At its height, over 400,000 Jews were imprisioned in 1.3 square miles. Starvation and violence killed some 100,000 in the first year, and the Nazis deported almost 300,000 to mass murder in Treblinka. Cruel selections separated mothers and fathers from their children; sadistic and senseless acts were the rule, with human kindness used as a lure for brutality.

But the commemoration of the Warsaw Ghetto Uprising, unlike other forms of Holocaust remembrance, focuses not on atrocities but on courage.

It draws attention to acts of resistance and stubborn humanity, from the courage of small boys to the sharing of crumbs of food, the caring for orphaned children – embodied by the amazing Janusz Korczak, even the creation of culture that persisted in the Ghetto in the face of inhuman conditions. Above all, it focuses on the final armed resistance waged by a few thousand Jews against the impossibly larger, full force of the Nazis, and that ended one month later in total destruction and with only 13 Jews remaining.

I've just spent the last week in Turkey and Kazakhstan on a JDC Strategic Partnerships/Ambassadors Circle mission and wanted to share something that made a deep impression on me.

At dinner the other night in Almaty, Kazakhstan, I sat with two young leaders of the Jewish community. Michael  and his wife Yelena are very involved with the Almaty community. He is a building contractor and she is a graphic designer. They're both in their early forties and they both volunteer in the Hesed, our federation-supported welfare center. In Almaty the Hesed also functions as a JCC, and they sit on the Board.

Here's the story: Michael grew up knowing he was Jewish. It wasn't a particularly significant part of his life. His mother actually listed their nationality as "Ukrainian" rather than "Jewish" on their internal Soviet passports. She had lived through nasty anti-Semitic attacks in Ukraine before the family moved to Kazakhstan, which has a low level of anti-Semitism. When Michael and Yelena married, religion wasn't really an important topic for either of them, and in a country in which there are high levels of intermarriage, he thought nothing of marrying a nice non-Jewish girl like Yelena.

Ambassador trips and programs are open to members of our JDC Ambassadors program and, when space allows, to individuals and families who are interested in getting involved with JDC. For links to more detailed information, click here or contact anyone on the JDC team or Rebecca Neuwirth, Director of Ambassadors, at rebeccan@jdcny.org or call (212) 885-0878

NOTE -- we'll have a private delegation going to Budapest and Szarvas August 12-15. Contact Laura Spitzer, lauras@jdcny.org if you are interested

an inside look at Cuba, Cuban Jews and the future

JDC (the American Jewish Joint Distribution Committee, Inc. - known affectionately by Jews around the world as "the Joint") is the world’s leading Jewish humanitarian assistance organization, impacting millions of lives in more than 70 countries today.